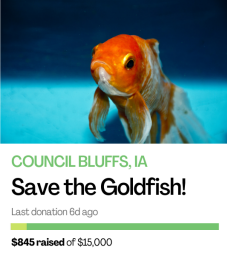 It was overcast when I walked into the pet store down the street from Council Bluffs Senior Living. The young man in the aquatics department — his name was Josiah — greeted me at the door, and I told him I wanted a pet to keep me company. The retirement home doesn’t allow dogs or cats, so I was thinking of a goldfish. That’s when he told me they are rare now. I just couldn’t believe it (and still can’t)! He said to look for one on eBay, but they start at $1,000 and only go up from there. When climate change started to take hold, the government didn’t bother to designate it as endangered because it was the goldfish, as common as spit or a cloudy day.

My first goldfish, Sammie, came home when I was six years old, right around the time everything moved to Zoom. Stuck in the confines of her bubble, the old girl would swim around, rising to meet me when I brought her fish flakes. I talked to her when I couldn’t get to sleep. I would turn on my flashlight and watch her sometimes-silver, sometimes-orange scales catch the beam.

Much later, I learned that Sammie died at some point. Many times, actually, and Mom swapped her out for others that looked exactly the same. At the dinner table, Dad turned my goldfish into a metaphor for cheap pets, long life, and lack of attention to detail. I remember the joke but didn’t get it at the time.

I first found Sammie belly up when I was ten. I left her there for a while, thinking maybe she would bounce back. Eventually, Mom came in to clean and took Sammie away with my dirty laundry. It was Dad who broke the news to me though, and he wouldn’t let me cry. Later, a friend told me I should have flushed Sammie down the toilet. At the time, it was my greatest regret that I didn’t give her a proper burial at sea. Some of my finest memories are of Sammie, number one, two, three, who knows how many.

Now when I wake in the night, the streetlamp streams through in the curtains, and I see pink walls, a framed stock photo of the Eiffel Tower, and an ugly floral loveseat. The only thing close to living here, other than me, is an arrangement of fake eucalyptus branches in a fat-bottomed silver-painted vase. With another Sammie, this would feel a heck of a lot less like a place where we’re all just gathering dust.

And I can’t just sit by and let goldfish go the way of the dodo. I know I’m not the only person who grew up loving these little guys. Support my fundraiser to save the goldfish, and we’ll build a small but mighty fish hatchery in the cafeteria at Council Bluffs Senior Living. Josiah drew up a plan to fit in three big, outfitted with filters and air pumps, and the pet store is throwing in fish food for a year. Any resident who wants a fishbowl gets one in their room, too. Thank you for your support.

What was your process for creating this piece?

I wrote the story in one of Tommy Dean's micro workshops, and the prompt was to create a flash monologue. I wanted to write from the point of view of someone in the near-future who was outraged by climate change, but not necessarily because of major catastrophes like flooding or drought. Instead, they are grieving over something lost that's relatively small but personally meaningful. Climate change is eliminating the habitat of many animals: Monarch butterflies, polar bears, red wolves. Though most of us will never see a polar bear in our lifetimes, so many Americans grow up with a goldfish at home. It's this kind of intimate loss that, I think, brings us closer to realizing the outcomes of climate change, which are very real even if we can't necessarily see it in our backyards today.

What is the significance of the form/genre you chose for this work?

As a flash writer, I sometimes use other forms to inspire the piece. I decided to choose the GoFundMe.com format because it's such an accessible place to share appeals globally. Whether large or small, the person making the request goes to the platform because they feel deeply that they are struggling; if they didn't, they wouldn't be asking for help. Since this story takes place in the near-future, it's not remarkable to assume GoFundMe will still exist when climate change's impacts are felt more widely on a personal scale - and that, someday, people may go online to ask for help remediating these losses.

What is the significance of this work to you?

Like a lot of people, I'm beginning to witness the effects of climate change in my backyard. Besides seeing catastrophes on the news, the weather is changing and shifting what we grow in our gardens and how we live locally, sometimes on the smallest scales. Right now, less snow or more flooding may seem like an inconvenience or a liability to those who are indirectly impacted — and so it's easily ignored or overlooked when the stakes are low. I hope to show people that we shouldn't ignore the smallest of signs; the stakes are not, truly, low at all, even if we lose something as small as the goldfish.

Kristina T. Saccone crafts flash fiction and creative nonfiction. Her work has appeared in 365 Tomorrows, The Bangor Literary Journal,  Emerge Literary Journal, and Unearthed, and she curates Flash Roundup, featuring the latest releases in flash fiction. Find her on Twitter at @kristinasaccone or haunting small independent bookstores in the Washington, DC, area.